Includes 19% VAT
plus shipping
Delivery Time: not specified
Rated 5.00 out of 5 based on 1 customer rating
(1 customer review)

Z-Carbon Speed – our hardest and fastest offensive blade (OFF++)

The Z-Carbon Speed Basic is preconfigured as follows:

The Z-CARBON SPEED is the hardest and fastest offensive blade we have ever built.

IT IS INTENDED FOR PLAYERS WHO NEED A VERY HIGH SPEED AND CAN HANDLE IT. IDEAL FOR VERY FAST TOPSPINS, EVEN FAR AWAY FROM THE TABLE. ALSO FOR POWERFUL SHOT PLAY AND DANGEROUS COUNTER-ATTACKS. DEFINITELY NO BLADE FOR BEGINNERS.

Facts about the Z-CARBON SPEED:

Z-Carbon fabric is a high-performance synthetic fibre that is used in various areas such as motor sports. The special feature of the fibre is its extremely high stability in combination with its low weight.

In relation to the table tennis bat, this means that the blade can be given enormous stability or hardness without increasing its weight. The harder a table tennis blade is, the faster the ball bounces off the blade and therefore takes a lot of speed with it.

The use of HiTec fibres alone does not make a good offensive blade, just as important is the clever combination of suitable blade types and veneer thicknesses.

With the Z-CARBON SPEED, the Z-Carbon fabric lies directly under the relatively thick top layer of spruce on the outside.
External fibres reinforce the hard playing feel and provide even more speed.

So that the blade does not lose too much feeling despite its hardness, we also use a thick outer layer of relatively soft spruce.

If this combination is too fast and hard for you, you should have a look at the softer offensive blade Z-CARBON: we use the same fibres for this blade. However, these lie directly on the core veneer and are covered by the intermediate layer and the outer veneer. This ‘defuses’ this blade a little and gives it a softer playing feel.

Made in Germany –
Each of our table tennis blades is produced with a lot of passion and attention to detail in our workshop in Neuwied.

Show reviews in all languages (4)

Search products
Product categories
New reviews
Do you have any questions or special requests? No problem! You can contact us Monday to Friday from 9.00 am to 5.00 pm by telephone under +49 (0)2631 / 956 814. Or you send us an email to info@soulspin.tt 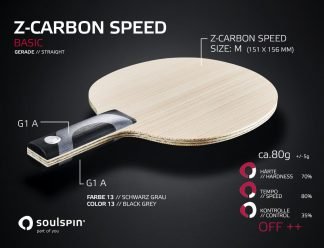